Google The Arizona Biltmore and you’ll be met with reviews of five stars, like the one below, from guests and visitors of this stunning Waldorf Astoria resort.

The charm of the old hotel from the 1930s, updated with new touches, creates an experience for the guests and patrons of this iconic resort, with many more reviews ending in “We will be back soon.”

This resort is a historical gem of Phoenix and the staff rise to the challenge of protecting its fine reputation. The rooms are spacious, well-appointed, and elegant. The grounds are magnificent and well manicured. The family pool is huge and has a swim-up bar, attentive staff, and great food and drinks.

Designed by Albert Chase McArthur, the Arizona Biltmore Resort, also known as the “Jewel of the Desert,” opened in 1929 and was heavily influenced by the old Hollywood glamour of the roaring twenties.

One of McArthur’s professors, Frank Lloyd-Wright, served as the consulting architect. His use of indigenous materials inspired McArthur’s organic architecture—low ceilings and the copper roof representing Arizona’s copper-mining industry— a concept well observed in the hotel’s color and layout. 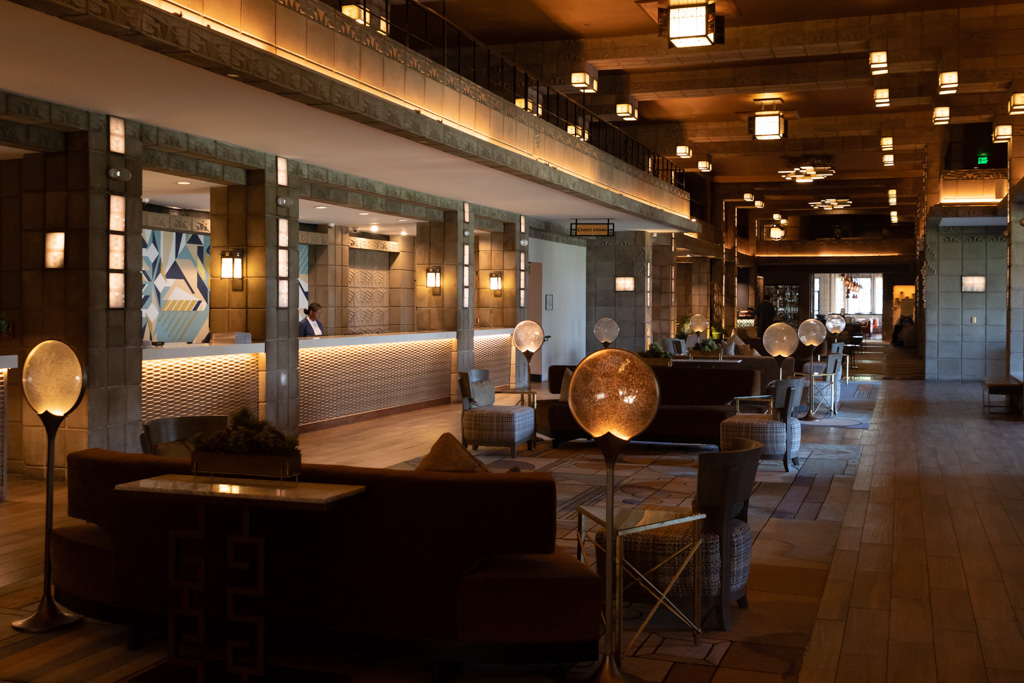 After celebrating its 85th anniversary, the historic playground for celebrities launched its five-month, $70 million-dollar redevelopment efforts in Spring 2021 to incorporate Biltmore’s historic architecture with modern luxury and remaster its contemporary look with great respect to the hotel’s glittering heritage and distinguished history.

Burton Landscape Architecture Studio lead the site design and landscape, including the various pools and fountains, while the design team at PHX Architecture and Virserius Studio Design Team headed the design of the Spire Bar itself; along with all of the architectural and interior improvements for the new look of the 39-acre property. Aqua Design International headed the Aquatic Design and Shasta Pools were the swimming pool and water feature installers for the resort’s outdoor space. 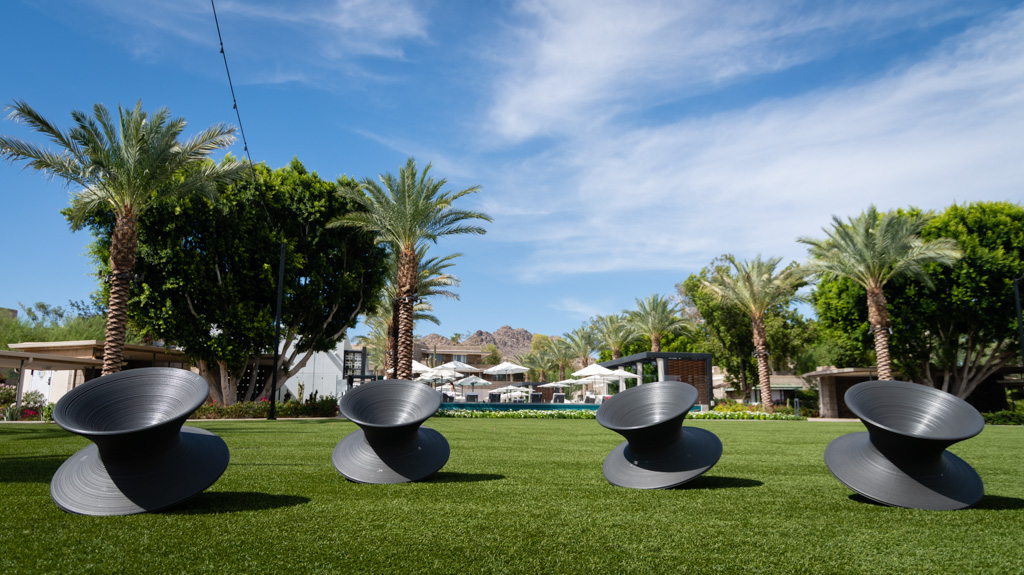 Collaborating with the design team and installers, Crystal Fountains was involved in three areas to enhance the guest experience at the Biltmore. The Spire Bar and just outside of the bar is the Event Lawn where weddings, gatherings, and meetings occur.  The Saguria Pool – the Biltmore’s Adult Only Oasis and the interactive dry deck feature right by the Paradise Pool and towering 65′ Twist Waterslide.

The Adult Only Oasis is one of The Biltmore’s seven pools for guests to cool themselves from the Arizona heat. The Saguaro Pool has our fyrefly jets around the pool’s rim to create a dramatic effect along the water’s edge and provide evaporative cooling in the evening.

At the end of the Saguaro Pool is a linear water feature that is similar to the Spire Bar lit with our linear lights.

This is our spray deck interactive feature. These 21 vertical Interactive Sequencing Deck jets with RBGACL LED360 lights are next to our NHC Hollow Column Jet gives the allusion of a clear glass tube. This lighting is ideal for situations where high colour rendering capability is needed to program numerous patterns for endless fun with water and light.

At night, the RBGACL LED 360 lights up The Twist and water shooting cactus for stunning nighttime views and fun.

The lighting is integral to the Spire Bar and surrounding area, including the grassy event space. Our linear lights have an enriched palette of RBGACL LED variations with limitless lighting and colour, that light up the Frank Lloyd Wright-inspired ceiling tiles. No one realized the impact of the lighting on the ceiling, and we have worked with the Biltmore team to create programming for numerous looks for the space.

Under the bridge to the bar is our Floor Mounted LED340 lights, which are medium-powered RGBACL light ideal for situations like this where high colour rendering capability is needed.

Our creative team used WATERlab™ to customize programming and designs for events like Pride Month and created various looks that compliment Biltmore’s brand statement and colour. 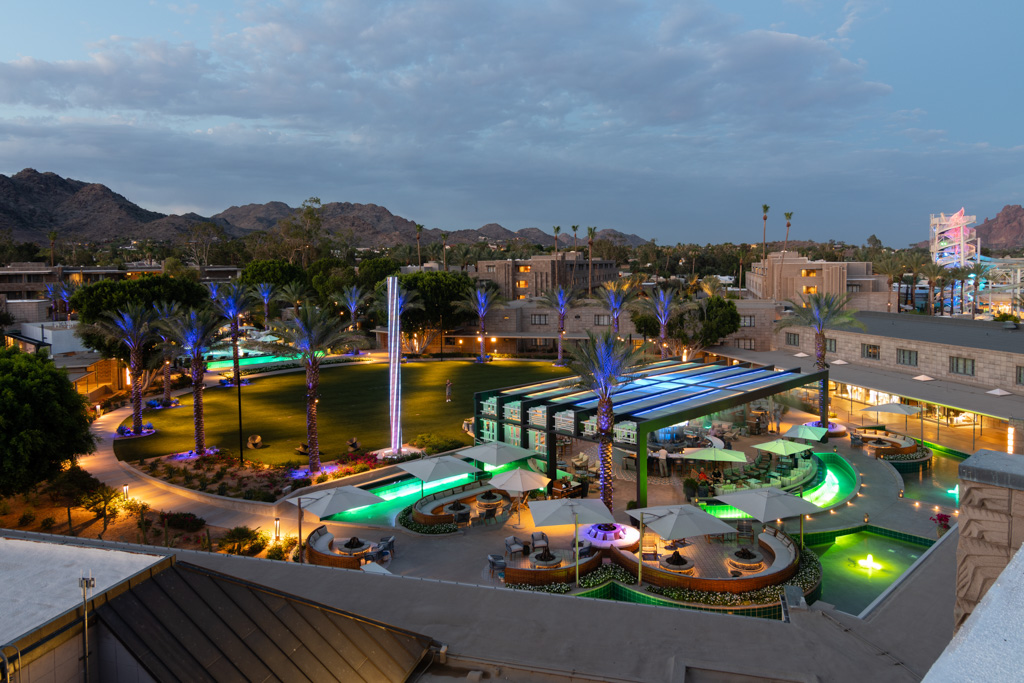 Outside the Spire Bar

Guests enjoying a drink with their companions at the bar hear the soothing sound of the waterfall lit by our 4′ RBGACL Spectra Linear LED lights.

Throughout the pool is our Hollow Column Jets lit with RGBACL LEDs that bubble and create a soothing white noise that relaxes and calms.

Take a Tour of The Biltmore

The Arizona Biltmore’s legacy as a Wright-inspired hotel remains a desert gem!

Its history, architecture, and design are firmly felt throughout the resort, and its legacy is only beginning. 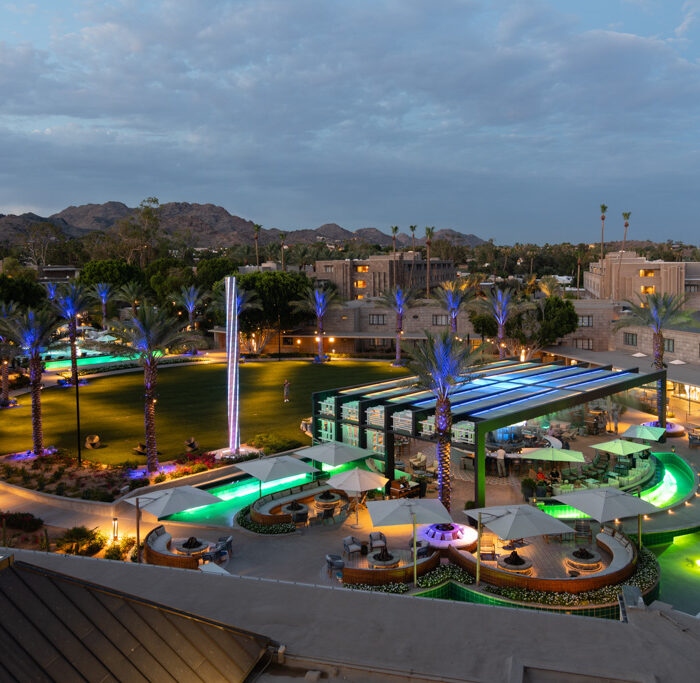 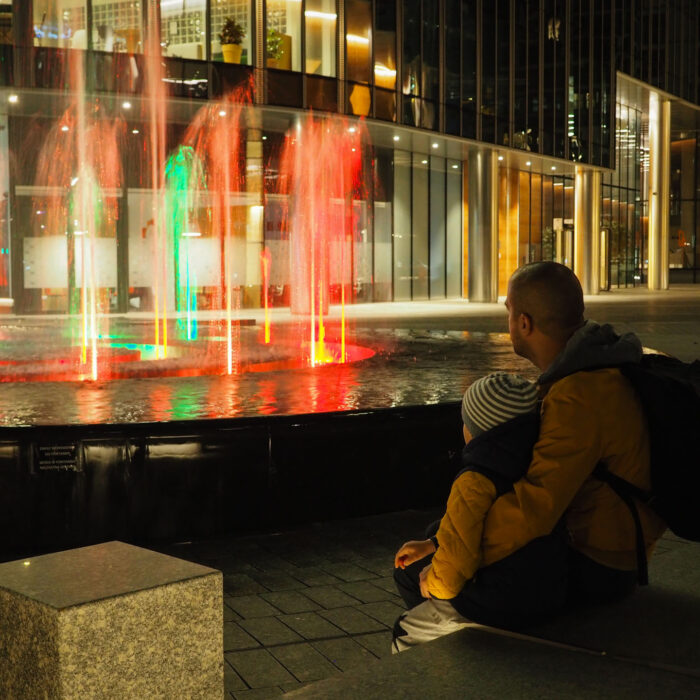 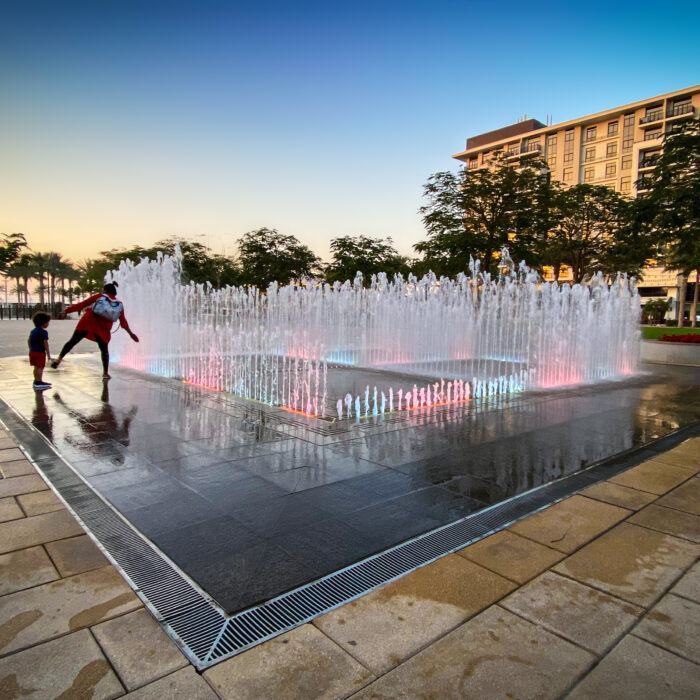